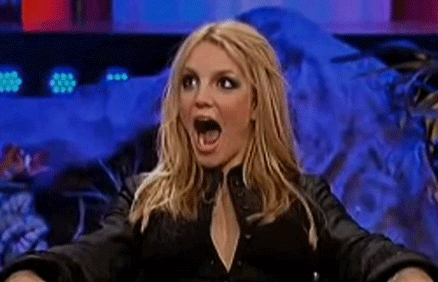 On Wednesday, the Oxford American Dictionary unveiled its 2012 ‘Word of the Year.’

Here’s the official definition from Oxford:

GIF: verb to create a GIF file of (an image or video sequence, especially relating to an event): he GIFed the highlights of the debate.

You know, a GIF. One of these things:

I know, Britney. I can’t believe it either.

Oxford gives plenty of evidence to support the winning word. The year 2012 is the 25th anniversary of the GIF itself, there’s a Tumblr page devoted to the quirky image and this GIF is considered a reason Gangnam Style blew up.

One of the Oxford judges, Katherine Martin, explains:

The GIF has evolved from a medium for pop-cultural memes into a tool with serious applications including research and journalism.

– Eurogeddon (summing up the financial mess in Europe)

– YOLO (meaning ‘you only live once’)

But there you have it. GIF is the winner. It can also be used as a verb (i.e giffing, giffed) and is pronounced with a hard or soft g.

GIF now joins the thousands of other words floating around in our English vocabulary. Congrats, GIF. You did it!

The wise people at Oxford Dictionaries do more than define words. They also have a great daily e-mail service that will boost your vocabulary.

Halfway down this page is a link for ‘Word of the day.’ Enter your email address, click the confirmation link in your email and you’re all set. Oxford also has a solid resource for proper punctuation, grammar and spelling. Probably a good idea to bookmark it.

And a bit more.

If you’re really bored at work, this page explains the origins of our many expressions (disclaimer: these may not all be true…but they at least sound good!)

For example: ‘Saved By The Bell’

When our ancestors realized that they were burying a great deal of people before their time had actually come, they came up with a solution. They tied a string onto the “dead” person’s hand, buried them, and tied the other end of the string to a bell and then tied it to nearby tree branch. If the person revived enough to ring the bell, their survivors would rush out and dig them up. Hence… “saved by the bell”

Remind anyone else of the Jessie Spano pill-popping scene?

Hmm. Spanoed. That should be a word…

Taking my tips across the US.

12 Line Graphs That Sum Up Our Lives at Work

Your career in a dozen charts.

Right before the students head to a trade show.