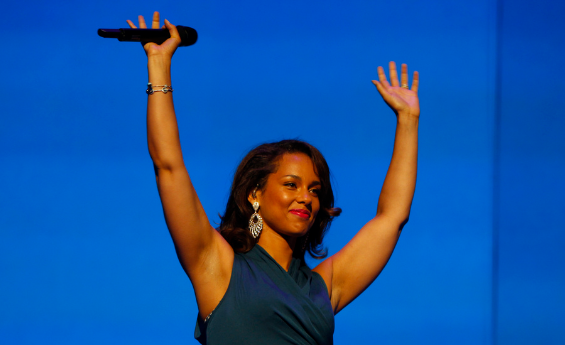 Did you know several musicians and comedians, including Alicia Keys and Dave Chappelle, now ask all their fans to put cell phones in locked pouches so the devices won’t distract from the performance?

It’s true. A company called Yondr provides all the pouches for live events. Geoff Edgers, a reporter with The Washington Post, did a feature on Yondr and asked several artists what they think.

Said Wesley Schultz of the Lumineers: “[Yondr is] a little bit clunky but it’s better than telling [fans] to leave their phones in their cars or forbidding it.”

It’s a novel concept, all these mini phone lockers. Perhaps one day it will be the norm at every live show.

If you noticed, I put in bold the word “all” three times. That’s because, in each instance, I can delete “all,” and the sentence retains its meaning.

If you’ve come around my blog before, you know I’m big on brevity. I always look for ways to cut the word count and sharpen our message. I also made editing skills a central theme in my book, Wait, How Do I Write This Email?, a collection of 100+ templates for networking, the job search and LinkedIn.

A few examples of my blog posts about editing:

Lately, I find myself deleting “all” when it’s used to modify a noun (ex: “all these mini phone lockers”). We can even remove “all” when the word describes a group of something (“All of us” could become “Everyone”).

Here’s the test. When you review a document, search for the word “all.” Each time it appears, ask yourself, “If I remove ‘all,’ does the sentence keep its meaning?” In most cases, the answer is “yes.”

Sure, it seems minor to pore over a document to remove one measly word. But every little edit adds up to improve documents like a job application, work email or report.

the words we use matter. Make each one count.

What other words can we delete?

How to Write the 7 Most Awkward Job-Related Emails

Negative political ads can improve our careers. I promise.