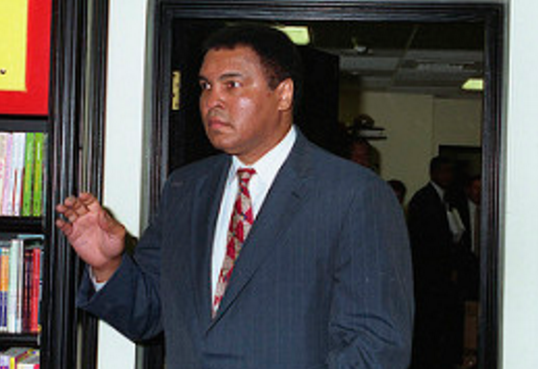 Much has been said about the life and legacy of Muhammad Ali, the boxer, activist and global icon who passed away this past week at 74 from apparent natural causes.

I’m sure you saw or read countless stories about the people Ali impacted on virtually every continent. Of all the well wishes and memorializing, one line stood out to me the most. Forgive me, though, because I can’t track down the news link to prove its veracity. But the line appeared in a CBS news story the day after Ali’s death.

The person said, “When Ali spoke to you, he made it seem as if you were the only one in the room.”

Online evidence or not, I think we can agree. That sentence above sure sounds like Muhammad Ali.*

*Rhyme scheme in deference to the man who could float like a butterfly and sting like a bee.

Innately, Ali understood the power of one-on-one conversation and how to build relationships. Like him, the best networkers in business recognize that, to earn someone’s respect, you have to give your full attention.

Here’s a scenario. You’re at a networking session through your local Chamber of Commerce. You find yourself face to face with a small business owner named Paul, and right away you can tell it’s not going to be the most scintillating conversation. Beyond that, you see other people in the room with more clout and influence, and you’d much rather talk with them.

But right now, you’re engaged in discussion with Paul. Channeling Muhammad Ali, you stay in the moment, face Paul directly, look him in the eyes, listen to his every word and try your best to create conversation (these six questions will help). You don’t glance around the room or start messing on your phone.

Your actions, then, make a small business owner feel like a industry tycoon. And like Ali, you have now made Paul feel like he’s the only one in the room — no one else matters.

No, you aren’t under obligation to talk with Paul the entire time. After several minutes, you have the right to say “great meeting to you” and then go to the bar for another drink. Ali met a lot of strangers in his life, but at some point the conversation had to end.

But the second you and Paul part ways, he thinks to himself, “Wow, what a great person.” He respects you because you respect him, and the interaction feeds into your overall reputation in the business community.

You have proven, like Ali, you’re not “too good” for anyone — rich, poor, successful, struggling, educated, uneducated.

The person you’re talking to is the only one who matters. And in networking, that’s all there is to it.

RIP to “The Greatest”

The One Networking Question People Love to Answer

How to Pitch a Reporter/Blogger about Your Business

You deserve coverage. Here’s how to get it.