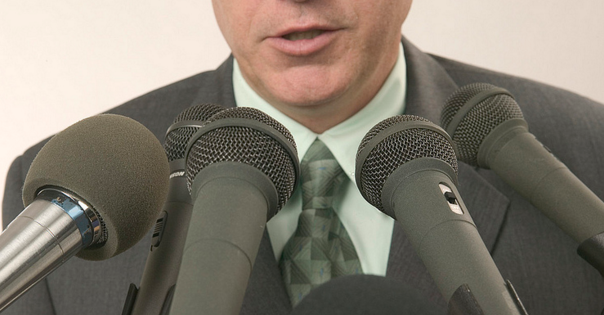 That’s because Rubio used a single description of President Obama too many times, and his competition (namely New Jersey Governor Chris Christie) pounced all over it.

When we fall back on the same words during a speech, the audience senses it right away. People start to think, “He’s really doing that a lot. Kind of annoying.”

What’s “that”? A distracting tic or habit. For example:

Today, I will focus on a more widespread public speaking hiccup: the use of the words “uh” and “um.”

Yes, we’re all guilty of the two verbal crutches, but some speakers lean on them way too much. After a few minutes, the audience starts to wait for the next “uh” or “um” and may not process what you actually have to say.

If we’ve gone years sprinkling “uh” and “um” into daily conversations, then the habit is magnified when we’re nervous in front of a crowd.

…did you catch it?

That’s right. Silence. If I don’t have the right word or am searching for the next sentence, I don’t say anything. I pause, stay quiet and plan my next move.

I’m not quiet for an extended length of time like 10 seconds. That would be awkward. It’s more like 1-2 seconds, those little bits throughout a speech where I could drop an “uhhhh” and fill the gap. Instead, silence.

The approach has another, more subtle advantage too — it helps to draw the audience in. If I create brief moments of quiet, it makes people lean in and think, “What’s he going to say next?”

On the flipside, if I talk in a never-ending stream of sentences linked by “uhs” and “ums,” there’s no time for the audience to absorb the thought. It’s like a moving train they can’t seem to board. Frustrating.

With little pockets of silence, everyone (speaker too) has time to think about the most recent line and gear up for the next one.

Next time you talk to a group (even from your seat at a staff meeting), try to pause rather than cling to “uh” and “um.”

And if you’re running for office like Rubio, ditch the robotic one-liners.

Sure, the words will keep you afloat, but your message may be lost at sea.

Do you have public speaking advice?

The journey from personal blog to professional brand.

It’s all about the right keywords.

How to Sound Your Best in a Phone Interview