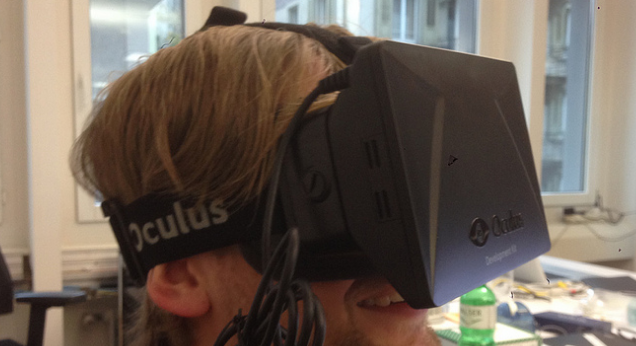 The 21-year-old prodigy has created a virtual reality headset called the Oculus Rift. Watch this demonstration. It’s worth it.

Luckey’s invention is considered the coolest gadget at the recent Consumer Electronics Show (CES) in Las Vegas (even better than an Internet-connected toothbrush and heat-sensing iPhone).

How is Luckey reshaping the video game landscape? One word: initiative. The Millennial started the project in high school, kept chipping away and now has the tech industry’s full attention.

How do you identify potential in new hires and, specifically, Millennials?

Surprisingly, almost every answer had a familiar tune. In essence, “we value young people with inner drive and those who take it upon themselves to go the extra mile — even when no one asks.”

In other words: we promote those who take initiative.

Whether you push yourself to learn extra skills, ask if you can do more or just plain work hard, bosses want to see if we have that “special something.”

So, business leaders: what does it mean to demonstrate potential? Below are several answers from the survey.

“An employer can teach a smart person the skills they need them to accomplish, but they can’t teach them dedication, motivation or passion.

Skills can be learned, attitude cannot.”

“Think outside your task and look for the big picture, rather than thinking about a ‘to-do list.'”

“There are a few signs I look for in the ‘superstars.’ For example, some young pre-professionals are already writing blogs or contributing to them.

This is one less thing I need to teach them and sets up an interview stage that is usually more advanced than average.”

Start a blog in 2014 and put your career on an entirely new trajectory. For nine profound lessons you’ll learning while blogging, read this.

Of-course he lacks experience in many aspects, but his willingness and eagerness to learn is what makes him stand out.”

For examples of young people doing the right (and very wrong) thing, check out “A Tale of Two Resumes.”

“If [new hires] are always looking to further their knowledge about the industry by asking to attend trade shows or go to local networking events.

Then, I can see they want to make a career out of our business.”

“They anticipate a manager’s needs without waiting for instructions.”

“Most of all to me it’s the feeling of being able to hold a conversation, ask questions, take their action items away from the conversation and follow-up.

Although those things sound basic it’s what sets good new employees apart from those who won’t last long in the company.”

Want to learn how to ask smart questions on the job? Here are four to get you started.

“I have a young employee who was given the responsibility of maintaining a complex database. She proceeded to attend every webinar and a free class on her own time in addition to reading technical manuals.

She developed her skill set and is now in the position of teaching those seniors to her how to use the database.”

Best way to gain new skills that you’ll use on the job? Start a side hustle.

“Willingness to admit what they don’t know and are always willing to learn.”

“A young friend of mine was recently tapped, after less than a year on the job, to fill the role of a higher level employee who was leaving the company.

Why was he chosen? Because he was seen as putting in extra time and thought at the lower level, and therefore having the potential to grow into the higher level position.”

Putting in extra time? Yep. That’s one of the 25 Things Every Young Professional Should Know by Age 25.

“In twenty years as an executive manager I can count on one hand the number of employees that showed initiative, as just described. Each one was promoted multiple times and they are still being promoted.

One became a CEO.”

“They have a fire in their bellies, are go getters, seek to learn from those around them, and give discretionary effort by volunteering for projects beyond their role.”

“They are quick studies and look at ‘I don’t know how to do that’ as an invitation to learn, instead of a daunting barrier.”

“We have a young employee who has been with us for about two years and we hired her right out of school.

At this time she has learned everything about our industry and she excelled in many client projects with difficult timelines and challenging client requests.

All through these sometimes difficult times, she kept a positive, “can do” attitude and never gave up. She is now able to manage a small team and is quickly rising through the ranks.”

“I want new employees who over-deliver on the small projects first.

Once they’ve hit a homerun on a small project, I’m eager to give them a bigger one.”

“Here are comments from interactions with young people demonstrating potential (who are rising) heard in the halls, conference rooms and offices of some clients.

– Yes, I can change my schedule to accommodate that meeting.

– I would be happy to stay late and finish this report.

– Ok, I appreciate your constructive feedback and I’ll do better next time.”

“They are extremely hard working, doing whatever needs to be done to get the job not JUST done but WELL DONE.”

Share this post with any friends who are working hard to get ahead in this crazy world.

Learn from this column, and then go get promoted.

Why Your Reference Letters are Worthless

They do not help you land a job.

Should I Put My Photo or Headshot on My Resume?

My answer is short and swift.

The Critical Part of Networking Most People Fail to Do

Someone gives you a business card. Then what?