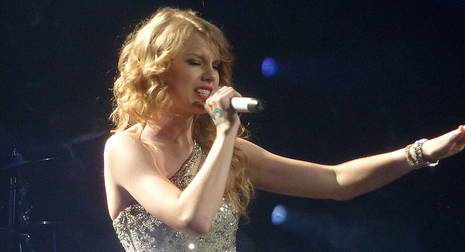 Taylor Swift has done it again.

Her latest album, Red, is already on pace to sell one million units. That means she’ll be the first female artist to have two albums hit one million in their opening week (the other album is Speak Now from 2010).

Why does Taylor Swift top the charts again and again? And how can her music make us better at our own jobs?

The answer is hidden in her lyrics. Swift’s mega-hits like ‘Mine’ and ‘You Belong To Me’ are infectious, but it’s the singer’s words — not the catchy beat — that endear her to millions of fans.

The opening lines of ‘You Belong To Me’:

You’re on the phone with your girlfriend, she’s upset

She’s going off about something that you said’

Cause she doesn’t get your humor like I do

I’m in the room, it’s a typical Tuesday night

And she’ll never know your story like I do

Swift uses detail (‘typical Tuesday night’) and paints a picture for the listener. She’s also talking about a situation many of her fans know all too well.

‘thumbs up if this is the story of your life.’

Swift understands how to connect with her audience, take them on a journey and make the songs memorable. Yea, her stuff is a bit melodramatic, but her crowd wants songs about family, relationships, breakups (and sometimes fairy tales). So she delivers it.

So what does all of this have to do with you?

Everything. Cover letters, speeches, work presentations…all opportunities to tell stories that resonate with your audience.

Stories make you compelling. They enhance the quality of your work and win you new fans. It can be a personal experience, an anecdote you heard from a friend or even something you read in a book or newspaper.

Just ask yourself: what does my audience want to hear?

Let’s try another example. How about ‘Before He Cheats’ by Carrie Underwood:

That I dug my key into the side of his

Carved my name into his leather seat

I took a Louisville slugger to both head lights

Slashed a hole in all four tires

Maybe next time he’ll think before he cheats

Now that is descriptive! Who can forget that story? Certainly not the guy who owns the car.

Just like generic pop songs, so many cover letters, speeches, etc…have no staying power because they don’t connect with the audience.

For example: your resume already lists your work experience. So use a cover letter to tell a story that sets you apart.

You may love Taylor Swift and Carrie Underwood. You might change the station the second their music comes on. Either way, you can’t argue with the results.

Telling stories takes your work to the next level.

One million albums in a week?

The numbers speak for themselves.

What other songs tell great stories within them? Anyone listened to the new Taylor Swift album yet? Reviews?

The power of personal connections.

“Take My Word for It” Audio Segments Coming to Rubin Education

Stop Thinking of LinkedIn as a Tool for Jobseekers

It’s the go-to resource for professional networking too.