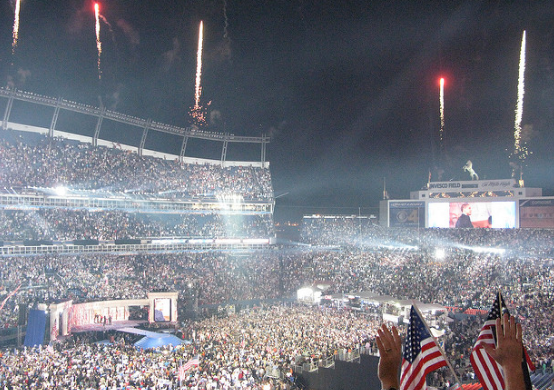 In the coming weeks, we will watch leaders from both major political parties rally their bases at respective conventions.

Republicans gather July 18-21 in Cleveland while Democrats meet July 25-28 in Philadelphia. In each city, elected officials will give impassioned speeches on the future of their party and our country.

I hope the speakers refrain from an approach that’s the height of arrogance: talking about themselves in the third person.

“Hillary Clinton is here to tell you…”

Sure, it’s fine for someone else to address the candidates by name. But when candidates themselves talk in the third person, it’s awkward, uncomfortable and feels downright egotistical.

Why? Because in a business context, we think it’s dignified to appear as though someone else talks about us.  The sad truth: we’re the ones writing about ourselves.

Plus, when you explain yourself in the third person, it feels impersonal. There’s no emotion or passion to your words. It’s like you’re penning a book report about yourself, and the tone is flat and forgettable.

Ah, but first person. Now we’re talking. With a steady dose of “I,” “me” and “my,” the LinkedIn profile comes to life and allows you to be, well, you.

NOTE: In the Experience section, don’t use first or third person at all. Start each line with active verbs. Instead of:

The line is written as:

The LinkedIn profile summary requires a subject, and that’s where I advocate first person over third.

In my book, Wait, How Do I Write This Email?, I provide an example of a LinkedIn profile summary for a fictitious IT professional named “Lamar.” Here’s the opening line from page 167:

Every day, I protect sensitive information on thousands of people from hackers and cyberattacks.

Now read the same line in the third person.

Every day, Lamar protects sensitive information on thousands of people from hackers and cyberattacks.

The second version sounds, again, like someone wrote a report about Lamar. It doesn’t feel like Lamar is accessible and approachable.

You might wonder, “Hang on, it’s OK to use first person on LinkedIn? That doesn’t seem professional.”

Not only is it OK, it’s essential. LinkedIn is a place to network and build relationships. Why would you talk in the third person and act like you’re not “there” to mix and mingle?

The word “I” suggests you’re the one behind the keys ready to engage in conversation. The approach makes you genuine, authentic and real.

And isn’t that how you want people to think of you?

How to Ask for a Networking Meeting with a Coworker

On Meeting New People, Following Up and Being Teachable