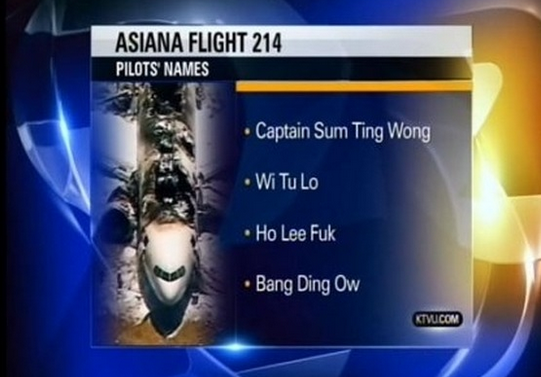 A summer internship is usually a harmless gig.

We get to answer phones, go on coffee runs and otherwise try to stay out of the way while learning the ropes.

Sadly, it wasn’t smooth sailing for an intern at the National Transportation Safety Board (NTSB). What happened is the #1 lesson for all interns: do not communicate with the public unless you have express permission.

By now, you may have seen the video from KTVU in San Francisco, in which the anchorwoman mistakenly reads the “names” of the pilots aboard Asiana flight 214. The plane crashed while attempting to land in San Francisco, killing three people and injuring 181.

An intern at the NTSB reportedly confirmed the pilots’ names, a Boeing-sized mistake that prompted an apology from KTVU and the NTSB, which had this to say:

“Earlier today, in response to an inquiry from a media outlet, a summer intern acted outside the scope of his authority when he erroneously confirmed the names of the flight crew on the aircraft.”

“Outside the scope of his authority.” That’s an understatement.

Now, a once inconspicuous intern has made a mockery of the media and our government. Who needs Jon Stewart, after all? This stuff writes itself.

What the Asiana Airlines debacle means for interns

As an intern, you have no authority. You aren’t paid to make decisions or interact with the public/media unless you first ask the powers-that-be.

When in doubt, check with your boss. There are no penalties for “dumb” questions. As we have seen, there are huge consequences for foolish mistakes.

By asking a lot of questions, you help yourself in two ways:

2. Prove to the office staff you are responsible and mature

Want more ways to be an indispensable summer employee? Check out The 10 Commandments of Being an Intern.

As for the people who manage the newbies…

Certainly, the NTSB has media relations folks who are paid to provide KTVU and every other newsroom with relevant updates on the crash. Interns can help dig up info but shouldn’t have direct communication with the press — unless directed to do so.

Bosses love to stick interns on social media duty as if it’s the lowest rung on the corporate ladder.

“Hey, you’re a young kid. Can you handle our tweetering or whatever it’s called?”

A twentysomething at the helm of a company’s social media account has, frankly, more power than the CEO. With one errant tweet or Facebook status, a college sophomore can cripple the business or damage its reputation.

If you’re in charge of interns, set parameters and don’t forget to tell them:

“If anything looks fishy to you, bring it to me immediately.”

For a One Page Resume, What Info Should You Remove?

Stick to the specifics. Remove the rest.

How to Build a Professional Network in a New City